On Sept. 16, 1890, in a boomtown on the North Texas prairie, Joshua C. Chilton established the Texas Normal College and Teacher Training Institute with 70 students and these auspicious words:

“It will be our aim to become leaders in the education of the young men and women of Texas, fitting them to creditably fill the most important positions in business and professional circles. We desire the cooperation of all who believe in higher education and who want to see our state in the very front of intellectual as well as material progress.” 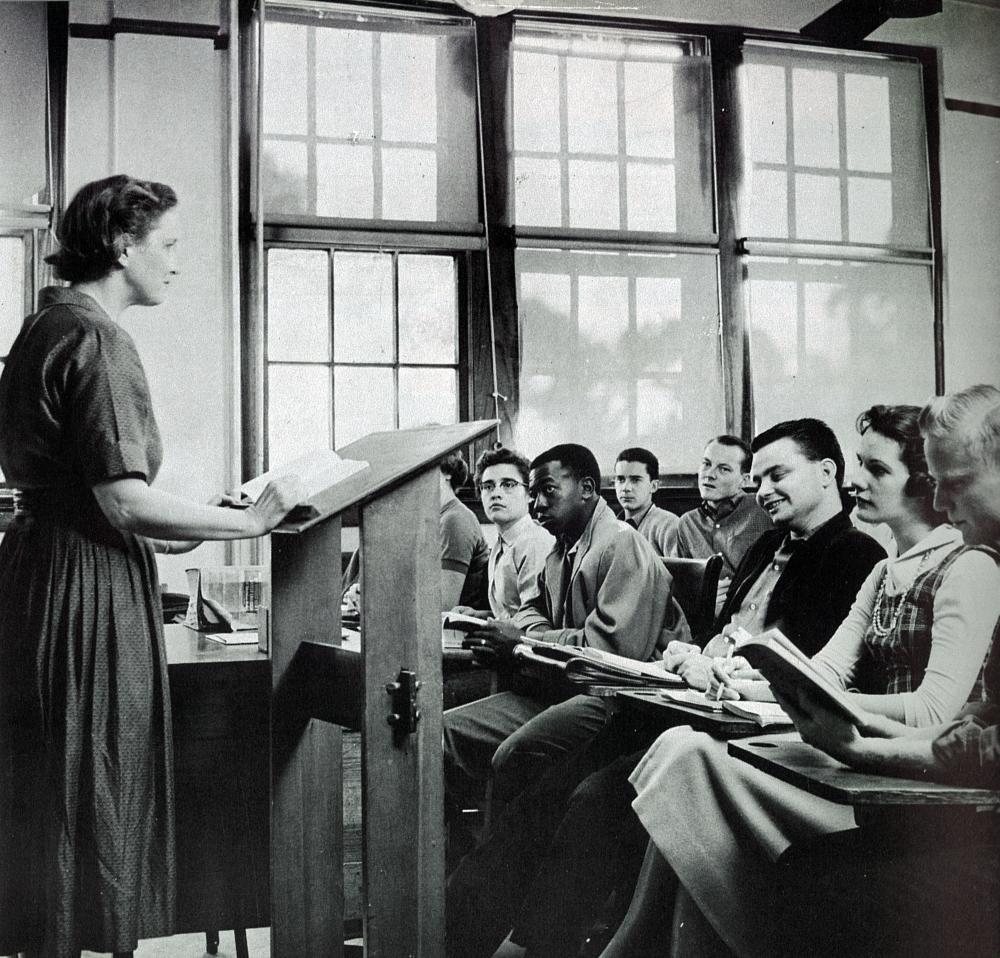 An English class photo from the 1960 Yucca yearbook

For more than 130 years, the University of North Texas has fulfilled its mission to create leaders and visionaries. Our students and alumni embody creativity, curiosity and something else that distinguishes them and makes them successful — resiliency. These qualities are in UNT’s DNA, borne of an independent spirit that sets us apart. From admitting women on our opening day to pioneering water quality research for the region, establishing the nation’s first jazz studies program and becoming one of the first universities in Texas to desegregate, UNT always takes the road less traveled on our path to excellence.

From humble origins in a rented space above a hardware store in downtown Denton, UNT has grown into one of the nation’s largest public universities and the largest in the North Texas region. We’re a thriving Tier One public research university with more than 42,000 students and a path to any career. As an intellectual and economic engine for Denton, the greater North Texas region and the state, we fuel progress and entrepreneurship. And as a catalyst for creativity, we launch new ideas, perspectives and innovations.

As we’ve grown, so has our reach and impact. Our programs are nationally and internationally recognized. Our research and scholarship spans the arts, science, engineering and everything in between. Our world-class faculty are making breakthroughs every day. And our students and alumni are changing the world around them for the better.

The first building on campus was the Normal Building, completed in 1891 at Hickory and Avenue B, where a fence kept out straying livestock. The private college reached an important milestone when it became state-funded in 1901. Its students lived in boarding houses around campus, following strict curfews and regulations regarding conduct, visitors, telephone use and buggy riding.

The first library opened in 1913, the year enrollment broke 1,000 and sports officially began. Standard four-year degrees were offered just as students left for World War I. Campus life picked up in the ’20s with the debut of Saturday Night Stage Shows, directed by ’Fessor Floyd Graham and featuring his Aces of Collegeland band. The shows, tours and radio broadcasts spread the fame of the music program.

The campus felt the effects of the Depression, but government funding programs supported the construction of the first dorms and a new library, and the college became one of the first in the nation to offer adult education classes. As master’s programs developed, faculty research began to grow. The first funded studies on water quality marked the birth of UNT’s work in environmental science.

The campus served as a military training site during World War II, and enrollment was cut in half as students were called to service. After the war, Vet Village was created for returning veterans and their families, ushering in married and graduate student housing on campus. In 1949, the first permanent Union was dedicated as a memorial to students who had died in the two world wars.

The college, which dropped “Teachers” from its name in 1949, focused on offering more programs and more opportunities. Doctoral work began, the first African American students enrolled and faculty gained national recognition. In the Union, students waited in line for coffee cake and danced the North Texas Push, and Greek organizations arrived as local fraternities and sororities went national.

The ’60s began with one of the biggest moments in the history of the college as it became a university in 1961. Enrollment soon topped 10,000 students and a new Union was built to accommodate the growth. As the decade neared its end, 2,000 students and friends marched in memory of slain civil rights leader Martin Luther King. “Dr. King never came to North Texas. But part of his dream did,” The Campus Chat wrote.

Commitment to the environment deepened as the university observed the first Earth Day with teach-ins and a campus cleanup, and the Institute of Applied Sciences was founded. While students dealt with the high gas prices of the energy crisis, other global ties strengthened and the number of international students began to grow. New construction and renovation included a library and an expanded Union.

The 1980s brought an enrollment of more than 20,000 and a new name to reflect the university’s role as a significant graduate and research university. The decade also brought innovative programs to campus. UNT became home to the Texas Academy of Mathematics and Science, a unique residential program for high-achieving high school students, and drew other prestigious programs funding excellence in teaching and the arts.

UNT began a yearlong celebration of its Centennial in 1990, and the 15-foot Eagle statue, “In High Places,” was installed near the Union in honor of the occasion. Other iconic construction in the ’90s included the Environmental Education, Science and Technology Building, which was UNT’s first green building, and the premier venues of the Murchison Performing Arts Center.

The campus entered the 21st century with more growth ahead. More than 30,000 students were enrolled by 2002, and science and technology programs multiplied as the College of Engineering and the Discovery Park campus were created. Students flocked to a new recreation center.

After decades of investment in research, UNT was named a Tier One research university by the Carnegie Classification. New buildings included the first-of-its-kind Apogee Stadium, the Life Sciences Complex, Kristin Farmer Autism Center, University Union, Joe Greene Hall, Welcome Center and Support and Services Building. College of Arts and Sciences was split to form the College of Science and the College of Liberal Arts and Social Sciences. G. Brint and Amanda Ryan donated $30 million to name the G. Brint Ryan College of Business.